Notes from the course of https://www.educative.io/courses/c-sharp-concurrency-for-senior-engineering-interviews

A basic example of using threads is the following:

Let’s say that we want to sum the numbers from 1 to Int32.MaxValue. If you only use one thread, you will have a slower result instead of generating two threads. Let’s see an example

The runMultiThreadTest method will run almost half the time of the runSingleThreadTest method. Usually, this result will be similar if CPUs support multiple threads. This task is often used with tasks such as Network or Disk IO.

A program is a set of instructions and associated data that resides on the disk and is loaded by the operating system to perform a task.

A process is a program in execution. A program can have several copies of it running simultaneously, but a process necessarily belongs to a single program.

A thread is the smallest unit of execution in a program witch simply executes instructions serially. The program can have several threads running simultaneously.

The execution of the threads is not sequential. The threads are independent of each other and run in parallel. So, it’s important to be careful when using global variables because they can be accessed by different threads and overwrite each other.

Definition between Concurrency vs Parallelism

It looks like a similar term, but it doesn’t.

A concurrent system is a system that executes concurrent programs that can be decomposed into several parts and each of those parts can be executed in any order without affecting the output.

That concurrent system can have several programs running simultaneously or in progress but this doesn’t mean that they are running at same time. If one is in progress and the rest of then are under suspension mode. The idea with the concurrent systems is maximize throughput and minimize latency.

And the parallelism is the ability to execute several programs at the same time in parallel. Usually, this is achieved by using hardware resources with multiple CPU cores.

In conclusion, the concurrent system does not need to run in parallel, but a parallel system is indeed concurrent. 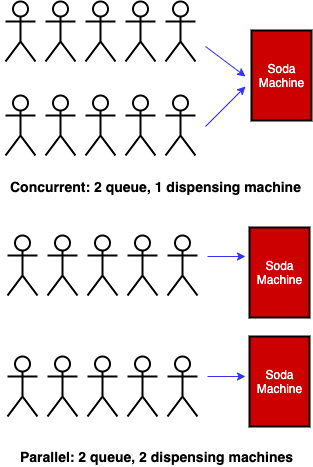 The cooperative multitasking model is the most dangerous because if you have malicious programs, it can run in an infinite loop and won’t allow other programs to run. Right now, all moderns operating systems are preemptive.

The syncronous execusion is when you run line-by-line code. If you have a long-running task, it might block the rest of the code until it is finished.

And the asynchronous execution is when you run code in a different thread. The async code does not need to run in a sequence, for example, if the program calls an Async function, it can follow the execution of the code and it doesn’t need to wait for the function response invoked to continue to run.

To get the result, we can use several options such as callback methods or promises. The Async code is very handy if you need to perform an extensive network or disk I/O process and it can take some time. 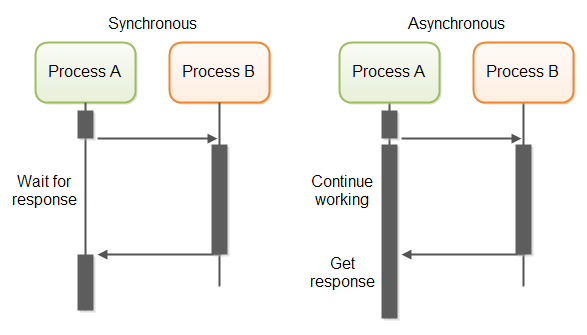 When you are running a program, it can consume computer resources. The program can use CPU Time, Memory, Networking Resources and Disk storage. So, when that program is running is compute-intense and you see there is a high CPI usage (close to 100%), you can say the program is CPU bound.

But, there is a limit of CPU units available. If you split that compute-intense process and execute it in parallel, you might finish the process in half of the time. But, you have an overhead of creating two threads and merging the result.

The I/O bound is when you have programs that require a good amount of resources from main memory or network interfaces to the CPU. So, the CPU and the main memory are physically separate, and there is a transfer distance and time meanwhile that information moves from one to the other. That is an I/O bound process.

The throughput vs Latency

The throughput is the number of operations that can be performed in a given time. For example, if you have a program that has to download several files from a web server, the number of files downloaded is the throughput.

The Critical Section and the Race Conditions

As I explain in the thread example, working with multi-thread applications can cause bugs that are very difficult to find. In this part, you’ll see how wrong synchronization in a critical section can cause race conditions and generate error codes.

If you are working with an application that can support working with threads, this program can run various program sections. However, you should take more care when threads from the same process try to run the same part of the code at the same time.

The Critical Section is the section of code that can be executed concurrently by multiple threads and exposes any shared data or resources used by the application.

And the Race Condition happens when you run threads that run in critical sections without thread synchronization. The threads access shared resources or program variables that can be changed by other threads at the same time.

If you run this code, the output will be:

if we want to run this in parallel with two threads insterad of one, we can use the following code:

This strange output is because each thread is accessing the same variable x, and the value of x is changing, we going to have different output response. It actually can change with each run.

Any thread can be at any step in this process at any time, and they can step on each other when a shared resource is involved. The state of x can be changed by another thread during the time between x is being read and when it is written back.

Let’s say a thread retrieves the value of x, but hasn’t stored it yet. Another thread can also retrieve the same value of x (because no thread has changed it yet) and then they would both be storing the same value (x+1) back in x!

Those Race conditions can be avoided by employing some sort of locking mechanism before the code that accesses the shared resource:

Now we can get a better output.

The Deadlock, liveness and Reentrant Locks

There are some concepts related with concurrency to take a look at.

The deadlock is when two or more threads are waiting for each other to finish their work.

The liveness is the capacity of a program to execute in a finite amount of time. If the program experiences a deadlock, that program it’s not exhibiting liveness.

The Live-lock is the situation in which two or more processes continuously change their states in response to changes in the other process(es) without doing any useful work.

The Starvation is when a process is waiting for a resource that is not available. In other words, it never gets CPU time or access to shared resources.

Now that we have defined several concepts related to concurrency, let’s take a look at the different types of locks and signaling in multi-threaded applications.

The Mutex or Mutual Exclusion is a synchronization mechanism that allows only one thread to access a shared resource at a time. As we have seen before, the mutex allow us access to the variable x in the RaceCondition class through several threads at the same time.

The mutex pretty much blocks the rest of the access threads to the variable x at the same time. Once the thread is released, it can access the x variable again.

On the other hand, there is Semaphore which allows us to limit access to a collection of resources. Let’s think that the traffic light as a set of permissions to access the shared resource and any new thread that wants to access the resource is blocked until the semaphore is released.